The job I am doing now as a temp involves filing and database and Excel work. Is this what I want to be doing? Absolutely not, but it’s something I feel very comfortable doing and a job that when I leave at 4:30 p.m. everyday, I have no worries or responsibilities associated with it. And every Friday morning a paycheck is deposited into our bank account. Some might say it’s the perfect job but those people might not miss their career the way that I do.

I’m very confident in my abilities as a Meeting & Event Planner and have always felt inside that I was destined to be successful in my professional life. But I have tried very hard to never come off as cocky or high and mighty. I keep my self-assured internal height comparable to my 5′ 2″ physical height. And in this temp job, I have doubled my efforts to remain open to any task they have for me and after only 8 weeks I already seem to have a reputation for being willing and enthused to do anything.

And then today I was asked to put shelves in a newly purchased book shelf. Now, I have sat on many a floor putting together many a binder at meetings, I have been covered in packing tape and corrugated box fuzz packing and unpacking boxes. I am not above manual labor and enjoy it, always pondering if maybe I shouldn’t have been a boy, Brother Rain. But something about doing this today really bothered me. I know this job is only temporary, but today it seemed like a cruel joke the Career Gods are playing on me.

So maybe I did think I was all that and a bag of chips. But it turns out the official food of a poor economy is not salty or sweet; it’s sour. It turns out it’s humble pie.

Tonight, while surfing through the channels, I was able to visit with both Half Pint (way before Dancing With The Starts) and the Waltons (who else do you know with their own mountain?) at the same time and I was transported back to 1975.

Who needs a time capsule when their husband is out and she has the remote?

Leave a comment
My first job was working in an Orange Juice factory, but I got canned. I couldn’t concentrate.

Then I worked in the woods as a Lumberjack, but just couldn’t hack it, so they gave me the axe.
After that, I tried being a Tailor, but wasn’t suited for it — mainly because it was a sew-sew job.
I studied a long time to become a Doctor, but didn’t have any patience.

Next, I tried working in a Muffler Factory, but that was too exhausting.
Managed to get a good job working for a Pool maintenance Company, but the work was just too draining.

Then, tried being a Chef — figured it would add a little spice to my life, but just didn’t have the thyme.
I became a Professional Fisherman, but discovered I couldn’t live on my net income.

Next, I attempted being a Deli Worker, but any way I sliced it . . . I couldn’t cut the mustard.
So then I got a job in a Workout Center, but they said I wasn’t fit for the job.

My best job was a Musician, but eventually found I wasn’t noteworthy.
Next, was a job in a Shoe Factory. Tried hard but just didn’t fit in.

After many years of trying to find steady work, I finally got a job as a Historian –until I realized there was no future in it.
My last job was working in Starbucks, but had to quit because it was the same old grind.

SO I TRIED RETIREMENT AND I FOUND I’M PERFECT FOR THE JOB!

In a text message to my husband today, I used the word “hovel” in describing my work area at my temp job. He replied, “Is this your word of the day?”. Funny guy that Mr. Sister Rain.

A little while later I got to thinking and came to the conclusion: WHY NOT?

So hovel it is.

Try to work it into a conversation and think of me when you do. Together we can put “hovel” back on the map!

When you think you have things figured out, turn the page.
Leave a comment 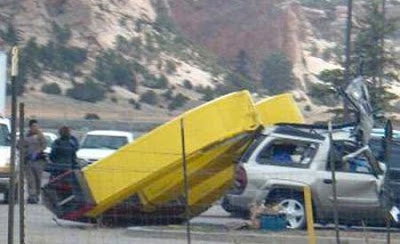 As I do every day, I went to the same drive-thru this morning to get my large cup of blood (aka coffee) and was greeted by the first voice I hear everyday (House Rule #23 – Do Not Talk To Me In The Morning) asking “Would you like to try a Shamrock shake?”. I replied, “No thank you, just a large cup of coffee please” only to hear the words that, if it were a Monday, would have returned me to my home and bed: “I’m sorry, we are out of large cups”.

I could have ranted, I could have raved. I could have gotten two smalls. What did I do? I drove to the next nearest Golden Arches. Whether it’s a job or your morning cup of joe, sometimes you can’t get what you want in the usual places, you’ve got to go someplace you wouldn’t normally go.

I spilled anti-bacterial hand gel on my pants today.

My hands were clean.

My pants were not.

I got my badge at my temp job today (after 7 weeks of being there) but I still cannot use the locked down computer/scanner/printer with it which was the whole purpose of getting the badge and the fingerprinting and security clearances that had to happen first.

I also made a contact today at a company who has a position that I am interested in and applied for last week but it turns out she is going for the same job.

Everything related to jobs for me seems to be one step forward and one step back.

I guess it could be worse — one step forward and two steps back. But it could be better too. Ahead Fred is much better than Even Steven.

If Sister Rain has 7 jobs in the works and today she finally got an answer back and even though it was a ‘No’ it was still an answer and honestly she didn’t want the job anyway, she swears on the Phillies winning the 2012 World Series, and 2 of the remaining jobs she interviewed for in early February but they say upon follow-up that they are still reviewing candidates, 2 of the jobs she just applied for last week and 1 this past weekend and 1 has been posted and reposted and applied to by Sister Rain over and over again, how frustrated on a scale of 1-10 is she?

And what color are Sister Rain’s eyes?