The humidity here in Southeastern Pennsylvania has been brutal this summer. We live in a perpetual state suffocation when we step outside as the thickness surrounds us and makes it hard to breathe. We take showers only to start sweating again from the minor exertion of drying off. Doing our hair and putting on makeup are futile exercises and speaking of which, working out, let’s just say I am already sweating from putting my hair in a ponytail before I even get on the bike and start pedaling.

This morning in a good morning text to a friend, I told her I had begun today’s sweating during breakfast. Auto-correct, in its infinite wisdom, changed “sweating” to “swearing”.

A lot of the time the error-fixing feature gets it wrong, but this time it got it oh so right. You can quite me on that.

While at CVS downloading photos from my phone to print, I noticed to my right a woman waiting to use the kiosk, looking something like this:

Upon my second glance, I realized that this is what was really there:

Crazy, right? Keep in mind that I don’t see color, my depth perception is terrible and everything is pixelated. The profound irony is that this took place at a drugstore, where they offer medications and supplements for just about any malady you can think of, except optic neuropathy.

the real bummer in all this? I would have loved to find out where she got her dress. 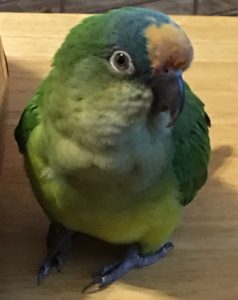 Four years ago today, we brought Piper home from the rescue. He was a different bird back then, defensive and sometimes aggressive. He had been through a lot in his six years prior to our meeting, having been surrendered to the rescue by his previous family who could no longer afford to rake care of him, followed by two years at the bird shelter. He acted mostly aloof during our several visits to meet and interact with him, and when he didn’t want to perch on our offered finger we didn’t push. We played with other birds and Piper watched our every move.

My husband and I knew that it would take time and patience and love for this little guy to feel safe and secure with us and let down the protective barrier he had grown around his heart. As he sized us up and then eventually would come to us during our trips to see him, our hearts opened and a little green and orange and blue conure crawled in. We wanted to be his mommy and daddy and his Forever Home.

A few days before we brought him home, I spoke with the amazing woman who runs the rescue. I asked her, “Do you think we would be good for Piper?” She wholeheartedly replied that we would. What I didn’t know at the time was how great he would be for me. What I didn’t know at the time was that three months later I would wake up blind. He is my steadfast companion, our laughter and joy. He now gives kisses instead of bites although his spunkiness dictates an occasional nip to keep us on our toes. There is now cuddles and play and chortles and bird talk. There is now immense trust and unconditional love.

One bird, two humans, one heart. A Forever Family. Forever.

Someone asked me yesterday what my super power would be. Without hesitation I said, “sight”.

Ability to fly? Driving a car again is the only method of transport I need.

Able to leap tall buildings in a single bound? Being able to see the depth of a curb or a step would be more than enough.

Faster than a speeding bullet? Nah, too hard on the kicks.

Amazing strength? I’m going to toot my own horn here and venture to say that after the last few years, I have found amazing strength in all the ways that count. Can I lift a train over my head? Never say never until you’re faced with the challenge.

Read minds? I can intuit what the people closest to me have got cooking upstairs. If I can’t, I ask.

Be invisible? I’ve spent the last three and a half years having most things and people be invisible to me. It’s not fun and I don’t wish for anyone to not be able to see me or anything else for that matter.

No cape, no golden lasso, no tights, THANK HEAVENS.

Just like Dorothy, I’ve always had the power but recovering my eyesight, well, that would be super.

If we had dreams while we were awake, they’d be called hallucinations.

Last Christmas my husband gave me wireless Beats headphones. When I lost my ability to read, I started listening to a lot of talk radio to fill the immense void left behind when reading books was no longer possible, Also, not so much anymore, but in the early days of losing my mom and vision, I would wake up at all hours during the night and my thoughts would instantly take a downward spiral so I would listen to talk radio to keep myself afloat.

I also listen to talk shows and music when I work out and before the wireless Beats, all sorts of I Love Lucy antics would occur with cords tangling and wrapping around me and the always hilarious iPhone on the table and me walking away tethered to the device. Thunk! Ouch!

This morning when I held down the power button on my Beats I found that the battery was dead and needed a charge. I dusted off my wired headphones and began my day and then my workout. It didn’t take long for all the comedy to ensue as I went about my morning tied to an object by a 3′ cord. I began to think about other things we are attached to that keep us from moving forward easily and unencumbered. When we are distracted by the negative emotions we accumulate in life and longing for the past, we constantly have to make sure it’s all packed up and ready to come with us before every step we take. It’s exhausting.

I realize that letting whatever is weighing us down is not easy. I see a therapist every other week to help me do just that. But I can tell you this: I feel light and focused when I’m not attached to a 4 1/2 ounce phone and from that I can imagine what it’s like to let the hard stuff go and be free.

Wireless headphones are great but a wireless life is the goal.

At the Apple Store today I was introduced to the tech who would assist me. I’m going to be honest, SisterRain.net’s promise to you, and tell you that at first glance I was disappointed. My specialist, let’s call her Steph as an homage to Steve Jobs, was older than all her associates and that gave me pause. I know better than to judge a techie by her cover, especially as I myself was probably about the same age as she and I too am adept at devices. But I immediately pronounced her subpar in my mind, having seen all the younger techs buzzing around the store.

I was nervous and after she introduced herself I returned in kind, only the giving of my name and the reason I was there came out in one long sentence with no breath or pause in between words. And my voice was at least three octaves higher than usual due to my anxiety. You see, I mistakenly moved all my emails from the inbox to the trash bin on my iPhone and when I tried to move them all back I couldn’t and found a whole new issue when trying to undo what I had done. Isn’t this always the case? Pandora’s box = Sister Rain’s device du jour.

Steph never batted an eye and nodded throughout my entire dissertation. When I finally did inhale she looked at me and said, “I’m very sorry.” The intake of oxygen supplied my brain with enough power to discern that she wasn’t referring to my technical difficulty but to what I had said in between my name and the description of The Great Trash Debacle of 2016, that I am severely visually impaired. She was profoundly real in her statement and of all the reactions I have received, from both friends and strangers, in regard to the current state of my eyesight, this woman’s stopped me in my tracks.

Although the store was packed, people and their sickly Apple products everywhere, in that moment, the controlled chaos surrounding us disappeared and I was aware of only Steph and myself. I looked her right in the eyes and thanked her with all the genuineness and gratitude I possess. Since the accidental trashing of emails occurred on Thursday I had been talking myself down off the Wall of Doom, assuring myself that emails I have saved for 15 years or more are not important. And in those three words from this stranger I was reminded that your health and the health of those you love is all that matters and to make someone’s day a little better is close behind. Yes, I was hoping for the Doogie Howser technician but as is often the case, I got not only what, but more importantly, WHO, I needed.

Steph was unable to fix my problem. As I suspected the trouble resides with my carrier, Comcast, and so I will have to give them a call. I obviously want a positive outcome of The Great Trash Debacle of 2016 but in all the ways that truly count, Steph has already given me just that. 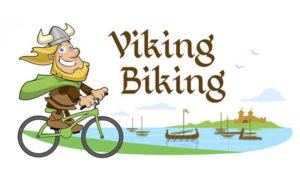 On the evenings before trash pickup day, you can tell who are the party animals on our street by the clinking of beer bottles in their recycling containers as they are taken to the curb. You may not know the brand but you know which of the neighbors had a really bad week, or a really good one, based on the amount of noise late Tuesday nights.

This week we put THREE bins out, two more than the norm. Anybody driving by tomorrow morning is going to think we must have hosted the fete to end all fetes when they see the trio of receptacles filled with glass, aluminum and plastic. The stir it will cause! “Did you hear that middle-aged couple threw a rager? They had THREE recycling bins out!!!”

Before TMZ arrives to root through our trash, there was no crazy shenanigans: no stair sliding, no beer pong, no quarters. There was, instead, two old people trying to stay hydrated in heat indexes of 100 degrees and two weeks worth of saving the earth to be done since we were away last week.

Recycling our youth is nice to think about but my arthritic knee would never make it down those stairs and even with his cheaters reading glasses my husband wouldn’t stand a chance at quarters. Our best partying days may be behind us but our water bottles of today just may be the beer pong cups of tomorrow.