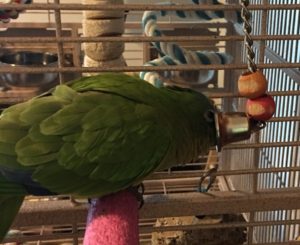 I saw this line from a poem in the book I was reading and googled it to find its origin. It’s from a poem titled, “Lilacs In September” by Katha Pollitt. Here is what stopped me in my tracks:

What will unleash itself in you when your storm comes?

I thought about the recent disturbances in my atmosphere: the death of my mother, my vision loss, my husband’s cardiac crisis, the sudden death of my father-in-law. There was no warning for any of these events, no time to hang shutters, stack sandbags or head for the storm cellar. I didn’t know in one instance the power would go out in my optic nerves and all would be dark. If I had been alerted and prepared even flashlights would not have helped. They all came quickly and were gone just as fast, leaving us standing in the debris, blinking, confused, asking, “What the hell just happened?“

I think that I had all the normal reactions in each case: anger, sorrow, shock, strength, weakness, denial, grief, gratitude for what was still standing. Survival mode kicked in as speedily as all four storms and the fight to move through it and forward was a prevailing response. “Unleash” is the perfect word and probably what most caught my attention in the poem’s line. I have seen many a dog in that split second when they are released from their tether and their natural instinct detonates.

In the same way we are unable to predict the storms in our lives, we can’t know for sure what will unleash in us. And short of an Anderson Cooper or a Jim Cantore here to report on the effects of these events, the people around us are the ones to tell the tale of what we became in the eye of the storm and the ensuing days, weeks, months and even years. I hope that they would say grace and perseverance, that I never gave up. And a little blog at SisterRain.net.

If I had a dollar for every time I reached down to pick something off the floor only to find that it’s a sun spot and not an actual thing, I would have an average of $3/week to go along with my strong legs and abs from all the bending.

I have always had an exceptional sense of smell and I do believe it has become even stronger since my vision left the building. There is debate – no, not THAT debate – as to whether or not that is really a thing, but it seems to be the case, well, in my case.

On Sunday morning I realized we were out of soap and I asked my husband to pick a bar up while he was out. We normally buy Lever in bulk but one bar would hold us until next weekend when we went grocery shopping. When I opened the box I was overwhelmed by the soap’s fragrance. The name on the box said “Dove” but to me it’s “Nana”.

Now, every time I go into the bathroom, it is 1976, I am eleven and spending a few weeks of my summer vacation with my Nana in Philadelphia as it celebrates the Bicentennial. It’s scrubbing her bathroom floor, black and white hexagon tiles, because I want to save her knees. It’s keeping my finger on the spout of her watering can like she taught me, so the water doesn’t come out as I tend to her plants throughout the apartment. It’s lying in her bedroom, in twin beds, while I tell her every microscopic detail of  my life and she listens, really listens, and asks questions. It’s her making homemade croutons and me thinking they were a delicacy and that she was better than Julia Childs. It’s her making Brown Apple Betty that twenty years after her death still makes my mouth salivate when I think of it. It’s me being the one to put the money in the bus fare collection box and the drivers being so nice to me. It’s my amazement that she knows which buses go where, which are the correct steps for the right subway station. It’s threading the needle for her even though she could do it herself and watching her work the treadle on her sewing machine like a pro. (That sewing machine is now in a place of honor in my living room.) It’s sitting outside after dinner with her neighbors, Claire and Mr. Cooper. It’s the Philadelphia water that my mother loved that I never acquired a taste for. It’s the round container that she would pour baby powder into then use a powder puff to apply. It’s walking across the street by myself to the drugstore to get ice cream and feeling so grown up. It’s crying the whole 45-minute-ride home because I miss her so much already.

All that from a bar of soap? It may be Dove but to me it’s love. And just like on the rides home from her house, I miss her terribly. But as you have just read, I carry her with me, more than I even realized. I’ve never been so happy to have run out of something in my life. 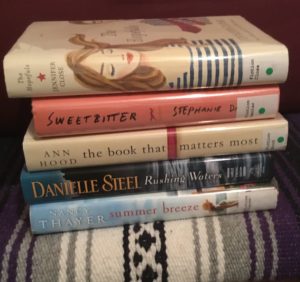 With one move of the second hand
Summer is now fall
Why is it that pumpkins
Look just like basketballs?

I had thought about blogging about Brad Pitt and Angelina Jolie’s split but was afraid of being too predictable and maybe a little vulturesque, circling and picking at the remains of a family. After all, there are children involved, a half-dozen in fact. It would be in poor taste to point out that if the rich and beautiful and privileged can’t make a go of it for the long haul, how do we mere mortals stand a chance? There are those who would say that money doesn’t buy happiness but it always seems to be the ones WITH the great wealth who make this claim.

But when I heard that Madame Tussauds had consciously uncoupled their wax figures, I thought about how quick and easy that was. I was envious of these organic compound likenesses. I know people who have been through breakups of long-term relationships and there is nothing quick or easy about them. We’ve got “stuff” and I’m not talking about our clothes or household items. I’m talking about the history together and the kids and the emotional baggage we all have, doubled by being a duo for so many years.

Do I think the real flesh and blood versions of the Pitts have it easier than us middle class folks? Not gonna lie, I do. But the waxy likenesses have it the best. They just get picked up and moved to a different room. And live happily ever after.

Every night when my husband comes to bed he brings along a bottle of water. Each morning, he places the empty bottle on our dresser and then on Saturday he takes them all down to the recycling bin.

I work out five to six times a week in our bedroom and got the idea to add my empty water bottle on those days to his collection. Every Saturday I would see him like this: 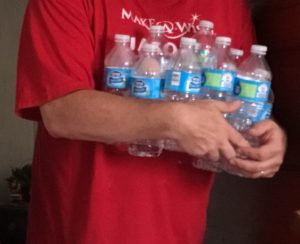 carrying the bottles down the stairs from the second floor. Some weeks one or two would get away from him and I would hear the sound of plastic hitting carpeting and the soft thud as it reached the first floor. Literally. It was all I could do not to say something but luckily trying not to laugh kept me occupied and I was able to keep him in the dark about what I had been doing.

The “Great Water Bottle Experiment”, as I dubbed it, went on for weeks. I told my girlfriends about it and they couldn’t believe he hadn’t a) noticed the extra bottlage and b) said anything about it and yet, having husbands of their own, they were could. Finally, the fifth week of this unprecedented test of a hypothesis, the subject, oblivioushusbandasaurus, approached me as pictured above and said, “Are some of these water bottles yours?”

I was laughing after the first two words were out of his hydrated mouth. “I have been adding my bottles for weeks!“, I said, amidst gulps of laughter. He was shaking with his chuckles, probably more at how hysterical I thought this was and so proud of my little caper. I felt it was an unequivocal success but what did the scientific data show?

CONCLUSION: After 26 years together, we still keep each other laughing. And with all our water consumption, our skin still looks terrific even with all the laugh lines. 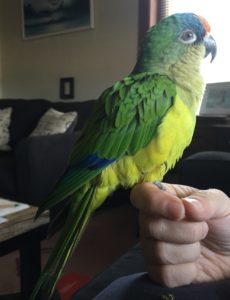 Friday afternoon – chilling with my Boo.