Walking my neighborhood is a welcome change from my daily ride on an exercise bike and strength building exercises. It’s difficult for me to traverse the uneven sidewalks but I don’t let that stop me.

This morning being a trash day, my already challenging environment included trash cans and recycle bins scattered on their sides all across my path. Who doesn’t love the smell of garbage on a humid late July morning? I know the buzzing flies sure do. I may not have seen them, but I sure heard them and sensed them dive-bombing me as I passed by, either to ward me off their buffet or attracted by my own sweaty menu.

One house is either doing an episode of Hoarders or moving, with lamps, chairs, at least thirty boxes, a mattress and three sides of a crib stacked two deep along the curb.

Of course I would also time my route with that of a trash truck on one long street, it passing me then stopping at the house in front of me, me passing it as the men hurled the discarded remnants of family after family into the back of the truck, as it seemingly belched with gluttonous glee after each new offering. We would perform this disgusting dance for a mile, with no chance of anyone cutting in. Finally I rounded a corner and breathed a giant sigh of relief and fresh air when it went in the opposite direction.

A half block later, I began to smell skunk. With every step it became stronger. Between the trash cans, trash truck and now this new stench, I figured the heart rate monitor on my FitBit was going crazy. Holding my breath as much as possible then breathing through my mouth as sparingly as possible without passing out turned what was to be a cardio workout a stress test instead.

A few strides after the next turn, I noticed something in the middle of the sidewalk and I just knew it was the remains of the skunk. I quickened my pace after taking one big deep breath as shallowly as  I could. Averting my eyes despite the morbid curiosity pull, I held in my gulp of air and headed for the corner that would return me home.

For me, walking outside is always interesting. But today’s workout turned into an endurance event I call The Stinker. Completing it made me feel like one tough mudder. 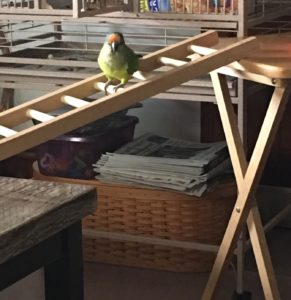 “New things may be scary at first, but before you know it you have found a favorite new comfy place to perch.”

I heard there is a new movie out about Pandora’s box this made me think about how we all have access to our own releasing of things we shouldn’t but do: the internet. There you can self-diagnose a paper cut as the first sign of a rare and incurable disease. You can find out the season finale cliffhanger that aired too late for you the night before that you intend to watch as soon as you get home from work. You are able to look up which team crossed the mat first in the last leg of The Amazing Race, revealed two months ago but you just began to binge-watch. If so inclined, reconnecting with old friends and classmates is a few clicks away and it’s not very difficult to cyber-stalk just about anyone through creative Googling. Does your family tree have a fork in it? Was your cousin actually your stepfather and your sister your aunt? It’s all there for discovery. Often just getting on www.-anything risks the chance you will see something you don’t want to; spoiler alerts are omnipresent and omnimaddening.

If you are going to open this particular box by opening your browser, you may find an infinite amount of those styrofoam peanuts inside. They are a mess to clean up and you never really erase all trace of them. If alive today, Pandora would no doubt warn us all via her YouTube channel, and Facebook, blog, Twitter and Instagram posts. After all, girlfriend’s got some mythology to promote!

My husband and I were watching a TV show where the couple was asked to say which body part of their spouse was their favorite. I turned to my husband and said, “My favorite part of you is your back. You know, when you leave in the morning.”

You may find this harsh but show me a fifty-something woman married half her life who does love her alone time and I’ll show you a lady who needs to,remember that the favorite part of herself is self.

If you had to sum up in one sentence your message to the world what would it be? Not who you are in relation to others, not your occupation or a list of your hobbies or other favorite things. I’m talking about a statement you would make based on your own unique perspective and experiences that would inspire others.

I have been trying to determine this very thing. I have been doing all sorts of exercises to figure out this out and it’s not easy. Ironically, “it’s not easy” was one of my brainstorming results.

The world we live in is all about brief messages: 140-character tweets, INSTAgrams, emojis in lieu of words, text messages that use “u” in the place of “you” (the savings of two whole characters is like gold!) and “BRB” for “be right back”. We are all about getting our message out there in the shortest way possible. So sharing your life’s message in one set of words should be a

Try it and see what you come up with. It’s kind of fun but frustrating too. And there’s another of my brainstorming ideas but that’s absolutely not motivating. Ive got to keep at it but now all I can think about is cake, which is ALWAYS inspiring to me. 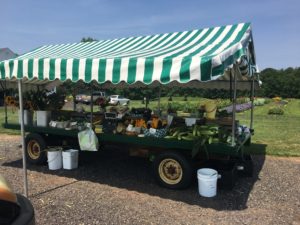 We love our farm stand. When we drive by the lot in the dead of winter I always implore my husband to stop for corn or peaches and he sternly informs me it’s not summer. He is mean.

On Saturday we picked up the farm’s first corn on the cob offering, picked just that morning from the field across the street. If there is a reward for surviving another season of snow, ice, wind and freezing temperatures, this is it.

On Sunday morning I was tidying up the kitchen and realized the bag of corn wasn’t in its spot. My first thought was we left it in the car when we unloaded the clown car of bags of groceries and cases of water the day before. But then I recalled ripping a piece of husk when I reached in the bag of corn thinking it had canned goods and bread in it as I was putting our weekly purchase away on Saturday. Where is the corn? Did my husband move it? I did a sweep of the whole kitchen, even looking in the refrigerator. Where the heck is it?

And then I remembered.

We had it last night for dinner.

It’s funny now but I was a little shook when I figured it out. Was this a senior moment? In the Seasons of Life I thought I was in the fall, not the winter. Autumn is my favorite time of year; I’m not ready for winter!

In my best, most convincing Jim Cantore voice, I told myself this was an anomaly, the rare occurence when Mother Nature has her own senior moment and it snows in July.

The corn, by the way, was the best we’ve had in 2017: sweet, tender and juicy. If you have a local farm stand, I encourage you to visit it and treat yourself to the very best of summer. Don’t think about the winter. This time of year is delicious.

Upon getting her first iPhone, I offered assistance to my friend as I welcomed her to Apple Nation. I should tell you right from the start I am not a paid spokeswoman for the company, but I will tell you that without my iProducts my darkened life would be less . . . everything. The accessibility features and ability to enlarge text and photos, the use of Siri and voice commands, have enabled me to stay connected to the world. All this plus I have always loved me some technology.

Teaching the iNewbie some of the features of her phone, she said to me,

We both laughed at her proclamation and the thought behind it, that I would be anyone’s “i/eye” anything. We continued to giggle, as women in their 50s are known to do, and then she exclaimed, “Well, you are!”

Much has changed for me since the morning I woke up without my sight. I have both lost and gained, as documented in this blog. But what has remained in my personal iCloud: my husband, my friends, Piper (my parrot), reading, writing, the internal hardware I came out of the factory with (sorry, Mom!) and the “apps” I downloaded over the years, have kept me synched to life.

For me to be called someone’s iPerson is iRonic, but it is also one of the nicest things anyone has ever said to me. Because even after all the updates, I am the person I was, am and will be. 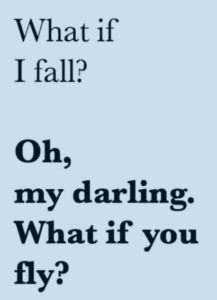 Last year I was having trouble with my knee — it was painful and swollen. After weeks of limping it along, I went to the doctor and learned I have significant arthritis in both my knees. After a cortisone shot and weeks of physical therapy, it has been doing really well ever since. Knocking on lots of wood here. I continue to do the strengthening exercises at home and yesterday while doing them I couldn’t remember which knee had been the problem; I actually had to look it up!

This made me so happy and reminded me that we really can turn things around. Of course there are many circumstances we cannot control and honestly, that sucks. In those cases, hard work, wishing, hoping and praying don’t result in what we want. The consolation prize in those instances may be a lesson learned or getting what we require versus what we desire. But that is a blog post for another day. Today is about acknowledging our successes.

Even though I couldn’t recall which knee was in bad shape this time last July, I am able to remember with absolute clarity the doctor giving me the results of the x-rays, the injection, the pamphlet about possible future treatments and the feeling of “not another medical condition to deal with”. But here I am now with a reminder for all of us that things can improve.

I have learned firsthand that we don’t need fully functioning body parts to have a really good life, but I will do everything in my power to get them. In this case, the effort paid off. I not only got what I wanted, I got what I knee’d. 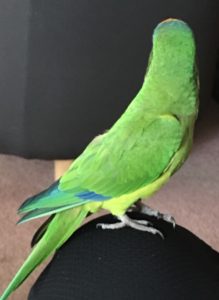 “Trusting somebirdy means feeling so comfortable and safe with them that you can show them all your sides.”