At my hair appointment today, the receptionist came and asked my stylist while she was shampooing me if she had time later today to cut a new customer’s hair who was on the phone.

The client’s name was Candy.

In thinking about sharing my story, I consider myself a typical person. I had a family and friends, a career I loved and hobbies that required eyesight: seeing all parts of this beautiful country, devouring books and driving my car. I am not the inspirational representation we often see, I am not a veteran who lost a limb and goes on to compete in a marathon on artificial legs or in a racing wheelchair.

Pre waking up blind I would consume a hundred books a year. Last year I obtained an electronic magnifier (Merlin) which enables me to read with the little sight that I do have. In 2016, my total number of books read for the year was sixty-five. And today I finished my sixty-fifth book of 2017.

I will never run a race but if you think about it, my return to reading so many books after losing most of my vision is like an athlete who loses their legs and returns to running. The main anatomical parts needed, respectively, has been compromised. But when your own body and mind can adapt, when there is technology and machinery available and you can return to your passion, you can return to yourself. Unlike running and racing, reading is not about the numbers. But to go from 100 to 0 for several years, 0 to 65 in ten months feels like a podium moment.

Parents today often implement chore charts for their children, offering them the opportunity to learn responsibility, pride in their work and the feeling of being a contributing member of the household. My kid is more of an I-make-the-mess-around-here kind of participant in the running of our home but trust me when I say the role he plays is significant. 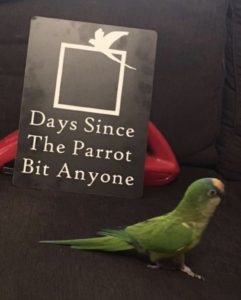 Although I cannot expect any housework from Piper, we are introducing this board to track his progress in the area “No Bite!” area. When we first brought Piper home from the rescue, he challenged us. He was defensive and sometimes aggressive. I went to work most days with a new crescent-shaped bite mark all parronts are familiar with on my finger. But over time he began to trust us and the Softer Side of Piper emerged.

He rarely bites now and if he does it’s more his way of telling us he doesn’t want whatever it is we are offering: food, a finger, a toy, and not a blatant attack. I can’t tell you the last time he broke skin but I can tell you that every day over the last four years there has been cuddle time. He does have his beak moments and if he’s on my shoulder and my ear is exposed he does like to take a nip. Those are the times a zero will go back to the chalkboard.

My spunky conure was afraid of his new report card and yet he didn’t try to bite it when I showed it to him and tried to take this picture. He did what all mommies want their child to,do when faced with the opportunity to fight: he walked away. My little boy is growing up. And I don’t have the scars to prove it.

Have you ever had a favorite local restaurant change its ownership and name, yet you continue to call it by its original moniker years later? Or have you ever known someone since your school years and two marriages later still think of her by her maiden name? And in my top example of this occurrence, has your CBS and NBC channels switched after the first 30 years of your life? Twenty plus years later I have to consciously recite to myself their old assignments then reverse them to get to the “newly” designated numbers.

Why is it, in a fast-paced, ever-changing, technological world where old dogs do learn new tricks is there some data we do not update? Is it nostalgia? Stubbornness? Habit? Brain flatulence?

Whatever the reason the most important thing is to be able to communicate to others the what, who and where in present terms. It’s okay to think in the past, but not to live in it.

A friend was recently telling my husband and me about his trip to Disney with his wife and daughter. He is in his late 40s, a fearful person, afraid of flying, cities and amusement park rides, among other things. We had heard that his family had somehow convinced him to go on Space Mountain and we asked him about it. He immediately complained about his neck and back still hurting him a week later from being jostled during the ride.

If you’re not familiar with the attraction, it is an inside roller coaster that is ridden in darkness. Our friend went on to elaborate what we already knew from having been passengers ourselves: because you can’t see what’s coming you don’t know how to prepare for it, how every inch forward is far more frightening than the typical outside version.

As he spoke, his description went right to my heart, alerting all my senses and insides that what he was describing is the same experience I have when walking or riding in a vehicle. Even if I know the path I am traveling by foot or the road being driven from when I had my full sight, it’s disorienting and often scary.

I am finding that now, almost five years into my own unexpected, abrupt and extreme change in the dark that what has happened to my vision is a metaphor for many aspects of life. In this instance, most of us have compared our own lives to that of a roller coaster ride, myself included even prior to the morning I opened my eyes to find them seemingly closed. Since then, though, with my own lights mostly out, I can claim Space Mountain as my own. But the anticipatory climb, the drops, the gentle curves and the sharp turns, the highs, the lows, sometimes the upside downs with your feet pointed to the sky, belong to all of us. Whether we realize it or not, we’re all ride people.

While thinking about what I wanted to get done today, my internal dialogue said something funny, followed immediately by “LOL”. Yep, the voice inside my head said L-O-L.

What’s next? The poop emoji when I think to myself that something is crap? And would that make me bilingual?

How can I authentically “tsk” and shake my head at the younger generation, as is not only my right my duty at my age, if I have drunk the Kool-Aid, a reference that proves I am not a Millennial.

Can you truly be HIP if you’ll need yours replaced in a few years?

I am able to read using an electronic magnifier, Merlin. I was an extreme reader before my vision loss and in the first three years after, I had neither the sight nor the technology to do so. But now I can once again devour title after title, and often wonder how I survived without it for over one thousand days. 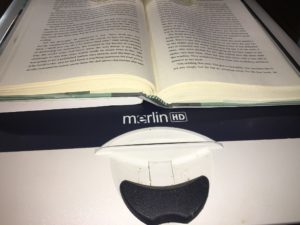 With the Merlin, the book lays on a tray and you move the tray as you read across lines and down to the next, as you look up at the words on the monitor above. I find that it works best if I put another book under the left side of the book I’m reading to balance out the two sides until you get halfway through. Otherwise, the book doesn’t lay flat and blurring can occur. I often check the total number of pages when I start a book so I have an idea where the middle is and can remove the supportive extra book at that point.

In life, we don’t know when the end will be so we can’t determine where the middle is. We can guesstimate; if I live to be 90 I am already seven “pages” past halfway and although it’s not something we dwell on, we are all aware of the potential maximum size of our stories. The minimum, well, that information exists solely with our publisher.

Wherever you are in your novel, I hope it is epic: filled with romance, a little mystery, triumph over plot twists and turns and love. And like the books I read, I hope that you are supported, but not just through your first-half chapters but until The End.

The same day I cracked my iPad (Broken Up But Still Together)  we had Piper’s annual checkup with his avian vet scheduled for that evening. As I attempted to calm myself down about the damage to my device I referenced the upcoming appointment to myself. The good outcome of the day had to be Piper’s health and not a piece of technology. 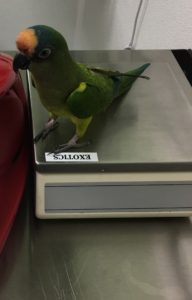 At the visit, after coaxing Piper onto the scale with a favorite toy and his textbook landings on the doctor’s, the tech’s, my husband’s and my heads in an attempt to avoid the towel in which he is wrapped to be examined, we received the fantastic news that he is one healthy parrot. Although we hadn’t any concerns, we let out breaths we didn’t even know we were holding.

My Apple devices keep me connected to a world I am not currently fully a part of, but Piper brought me back to life after I lost my sight, three months after adopting him. He needed me and showed me that he didn’t care if I could see or not, he just wanted a forever mommy. His health and happiness are paramount.

Technology can be shattered. But the bond this little guy and I share is unbreakable.

I was reading online today the conspiracy theories that the First Lady is using a decoy at public appearances.

Reading the statement “Limits begin where vision ends” on social media, I knew that it was made metaphorically, but it spoke to me also from a literal perspective. I will admit that when I initially suffered the loss of my sight it felt as though I had nothing but limitations. But this shifted as I got creative doing daily things, such as filling a glass without overflowing it and organizing my clothes and jewelry in a way that would allow me to dress and accessorize easily, and the bigger things, imagining a new and different career for myself. It wasn’t premeditated but by figuring out how to live a life without 20/20 I have accomplished more than I ever had when I was driven to overachieve with my optic nerves at 100%.

For me, limits ended when my vision did.