Our next-door neighbors had several parties last weekend and as I walked by an upstairs window, I could somewhat make out quite a few items strewn across their backyard lawn. I can’t see well enough to discern what it all was so I grabbed a pair of binoculars we keep in our spare bedroom for bird feeder and bird bath watching, and focused the lenses. I was then able to recognize a cooler, their fire pit, a lawn mower, children’s bicycles and chairs. There were other things I probably could not have identified with 20/20 sight.

As I did one last sweep of the perimeter, I realized with shock, a little disgust and a smidgen of amusement that somewhere along the way I stopped being a woman with magical powers and became Mrs. Kravitz. 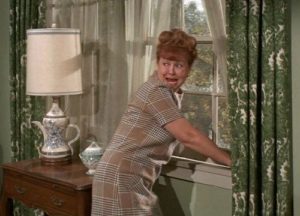 At one of the companies I worked at for a dozen years, there was a cafeteria with daily hot meals, soup, salad bar and made-to-order sandwiches. It’s been years since I thought of it but recently I remembered my favorite lunch there, a skinny cheese sandwich. It consisted of two pieces of American cheese and a little mustard on rye bread.

I made one this week and the strangest thing happened. My mind and mouth immediately thought of pretzels. That was always my side with a skinny cheese, a somewhat healthier choice than potato chips. I had never before nor since paired a sandwich with pretzels. Taste buds are not a muscles but it felt like muscle memory to me that I not have one without the other.

It’s remarkable how much we remember but equally fascinating how much we forget. Luckily, when our minds don’t recall, our bodies often do. Like skinny cheese and pretzels, they are a wonderful complement to each other.

As documented on this site many times, I love me some American history. I am fortunate to live near Philadelphia and visited often as a child. It is where my grandparents lived their entire lives and my mom was born and raised there. The people and places that birthed this nation were as big a part of my upbringing as was school and Girl Scouts, and the older I got the more I wanted to know. I have been fortunate to go to many other significant locations that played a role in the creation of the United States, and I always manage to leave a few tears behind. I cannot get enough of this country’s beginnings and the tissue industry is all the better for it. 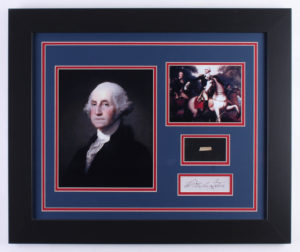 My husband recently surprised me with a birthday gift, a word written by a quill pen held in the hand of George Washington. It is not a reproduction. It was painstakingly cut out of a letter created by the soon-to-be general on May 4, 1775. It has been authenticated by a reputable expert and was penned at Mount Vernon before he left that same day for Philadelphia and the first meeting of the Second Continental Congress. In this nation’s history and mine, it all comes back to Philadelphia.

As I studied diary entries and letters to learn more about this time in Washington’s life using the website, the National Archives, Founders Online, it was fascinating and thrilling to be able to read the records from the man himself. How could he have known what was to come? Pass the Puffs, please.

That’s the thing about our passions. They live in us at a deep emotional level. And thanks to a very thoughtful man in my life, an unimaginable piece of mine now lives in my home as well. 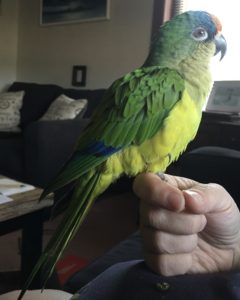 One of the things that can make me sad is the fact that I can’t see Piper’s beautiful colors. He is our peach-fronted conure, which is a type of parrot, and we adopted him from a rescue a mere three months before I woke up blind. I don’t really think about it, though, until someone comments on how pretty his plumage is and then I consciously remember what he looks like as well as I can. And that can hurt a bit. But you know what? Piper is my steadfast companion and his personality and spirit are brighter than his vibrant exterior.

They say that love is blind but I have found just the opposite. I may not be able to see his orange, blue and green very well, but for me they have become the color of love.

There are diehards
and then there is my husband.
He is a man of loyalty, conviction
and commitment.
And a girl’s just lucky
to come in second.

One of my favorite shows of all time, The Big Bang Theory, aired its final episode last week. My husband and I have watched the show since it first aired in 2007. We, of course, are not alone but there is a very special place in my heart for this comedy as it helped sustain me through my personal version of a tragedy. 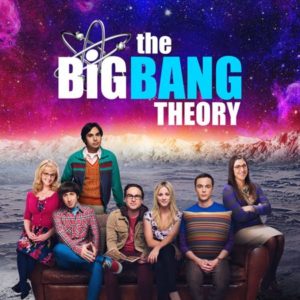 When I first came home from the hospital after waking up blind, I could see nothing on a TV set. I was unable to use an iPhone or an iPad. I was isolated and cut off from every aspect of my life. But each evening, reruns of The Big Bang Theory were on. I could listen to the familiar characters, imagine the settings and follow along well. It was a victory of sorts to participate in something normal . . . and to laugh.

Over time, I regained a little sight and could see a bit of what was on the television screen, not in detail and in black and white, and I was able to engage in new programs with my husband’s explanations and clarification as needed. But for many months Big Bang played an important part in saving me when my world first went dark.

*** SPOILER ALERT ***
As Sheldon stood on stage and called out his friends in the audience by their full names, asking them to stand, thanking them, I was laying on my bed, watching on my iPad, technology now allowing me to see a bit more definition. I was crying and silently expressing my gratitude to the actors and their characters right along with him.

When you are struggling, find comfort and normality wherever and with whomever you can. I have found that familiarity does not breed contempt, it breeds survival. A part of my healing, well, it all started with a Big Bang.

“They say when life gives you lemons,
make lemonade.
But what if you don’t like lemonade?”

If you’ve ever stood on a beach looking at the ocean, listening to its waves pound and roar, you have no doubt experienced the feeling of smallness in the grand scheme of time and the universe. As I did just that recently, I was overcome by the sensation of the cool, wet sand between my toes and the memory of my mom who was my shore buddy until her death seven years ago. It was our place and it now feels viscerally wrong to be there without her.

One of my closest and dearest friends was with me and as I began to cry I apologized to her. I hate that after all this time I find it incredibly difficult to set foot on a beach. My friend hugged me and encouraged me to let it out but I didn’t want to. I am tired of this inherent negative reaction to a positive locale I once loved. I feel weak and mad at myself for not being able to get passed the loss of not just my mom but this huge part of my life.

As we walked back to the car, my friend holding onto me as I slowly and carefully navigated the holes and shifting sand, I realized that throughout the whole of my life I have always had someone I care deeply about by my side on the beach. On this particular day, I would not have ventured onto the sand if I’d been by myself. Yes, my mom is gone and my sight wasn’t far behind her, five months in fact. But I have never bern alone since then. The love, and the ocean, remain.

“The drama that a bride can experience
when it comes to choosing her bridesmaids’ dresses
is the perfect preparation for marriage.
She learns to compromise, pick her battles and when necessary,
throw a hissy fit.”

You have your own birthday on your iPhone calendar because: