“I am thankful that
I didn’t wake up blind this morning
as I did on November 28, 2012.
Life goes on
and isn’t that the greatest blessing of them all?”

I recently wrote about my mom-in-law’s best friend, “She Left Us Her Best”. And now it’s time to tell you about my dad-in-law’s counterpart.

David was my dad-in-law’s best friend for 40 years. He was the first call my husband made when his dad died during an outpatient heart procedure. We learned that day that the bigger they are, the harder they really do fall. David is a hulk of a man, with a big personality to match. He will give you non-stop humorous ribbing and tells stories so funny you always end up crying. Out of all of us, David has found it the most difficult to recover from dad’s death. I should be ashamed of myself for saying such a thing, as if there is a barometer for grief. This whole website is an homage to the fact that there isn’t. So let’s just say David’s pain is still raw and evident five years in.

David and his wife, Mary, remained close with my mom-in-law after dad died, the two ladies often went on short trips together. Although dad was no longer here, they were, in many ways, still a foursome, dad never far from the conversation and, in most cases, the center of it.

And then my husband had to make the call again.

My mom-in-law suffered a massive stroke and we quickly knew she would not survive. My husband let David and Mary know, continuing to call them with updates during the eight days that followed. On Day 5, they came to see her. I was alone with mom when they arrived and I gave them the latest report on her condition, as we tracked every minuscule detail, trying to humanly gauge a process that is anything but. As Mary went to her bedside I explained that if she held mom’s hand and told her she was there, mom would squeeze her hand. She did and she did.

David sat as far away from the bed as he could get in the small room without going into the hall, his large frame dwarfing the folding chair. Others from the many different walks of mom’s life came and went. David told us all tales spanning four decades and when it was just the four of us, he admitted to me that he sat in the lobby of the facility for a long time before he could bring himself to come to mom’s room. They stayed a long time and when they got up to leave, I encouraged David, not for the first time, to hold mom’s hand and tell her he was there. I didn’t want to push too hard, I knew how completely broken he was, but I also felt he would regret if he didn’t. If there was any blessing in all of this it was that there was time for goodbyes.

Mary had risen from her chair by the bed and retrieved her purse, blowing her nose and wiping her eyes. There was no mistaking any departures from this room for what they were, the last time they would see mom alive.

I tried one more time. “Go hold her hand. Tell her you’re here.” He stood looking down at me, at least a foot taller than I am, and time seemed to stand still. No one moved. Finally, “Should I?”, he said and turned to look at his wife. She didn’t offer a response unless it was a facial expression or nod of her head that I couldn’t see. He turned back to me. “I think you should”, I replied.

I took his huge hand and walked him the few steps to the bed, not daring to breathe for fear of scaring him off. I gestured to the seat set alongside mom, looking like doll furniture in this substantial man’s presence. I stepped out of the way, he stood looking at mom, ignoring the chair, then slowly took her hand. The room was filled with silence and a lifetime of love and laughter. After a bit, I whispered, “Tell her it’s you.” Although the day is etched in my memory forever, i don’t recall what his words were. But he said something. He turned to me, “She’s squeezing my hand”, he said, his voice filled with emotion and surprise.

The next few days would hold more of the same, people coming in disbelief to spend some final time with mom until finally only our small family and mom’s best friend remained vigilant. And on Day 8, as is always the case, with one last breath she was gone.

David and Mary were two of the few close friends we invited to the private burial between the church service and the luncheon at a local restaurant mom loved, located a few blocks from where she grew up. It was the perfect afternoon of good food and wine, laughter, stories, people meeting others they had heard about from mom but had never met, and there was love. When David and Mary found me at a table with my dearest friends to say goodbye, this larger than life man in every way wrapped me in his arms and said, “What you made me do in that room . . . I love you.”

Three months later, my husband and I had breakfast with David and Mary. They took us to see the new home they will be moving into in the next couple of weeks, just as Mary had taken mom only weeks before she died to show her the lot where the house now stands. The two women had planned to decorate the place together. They were excited for us to be there but as we stood talking in the kitchen of the finished but empty building after the tour, what wasn’t there was palpable. Not furniture. Not photos.

The first recipe made in this room was missing some significant ingredients, creating a moment both bitter and sweet. And the largest serving went to the Goliath we have learned is David. 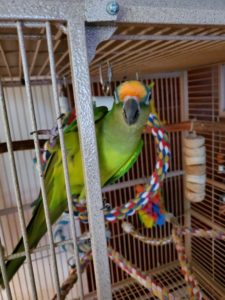 I aspire to greet every day
as Piper does:
Excited and raring to go.

As we pulled into the Philadelphia parking garage for some testing at Wills Eye Hospital, the old familiar anxiousness surged through ever fiber of my being. There was no reason for it, the feeling, there would be no results, scary or otherwise, we were on a fact-finding mission. Yet I could not control the emotions churning inside me. I told my husband of my reaction to our arrival and it was no surprise to either of us. It is the same every time we make the turn into the garage.

“It will be fine”, he said, his usual mantra whenever I get stressed. “I know, but I can’t get a grip”, I replied. “It’s no wonder, with everything that’s happened”, he offered. So much has occurred over the last seven years, I had to ask, “What do you mean?”

I burst out laughing. He calls it like he sees it which is especially helpful when you’re his visually impaired wife.

“The best prices on kitchen products
can be found in the back of your cabinets.
In box, never used, mint condition.
Possibly antique or “vintage”.
Free.
I like to think of it as ‘mebay'”.

Growing up I always spent a week in the summer at my Nana’s in Philadelphia and in 1976 I stayed a few extra weeks to join in the city’s celebration of our nation’s bicentennial. One of the many places we visited was the Franklin Institute, a science museum named after Benjamin Franklin.

In the gift shop, I bought my mom a bookmark. It was simple and probably cost a quarter back then. This summer, 33 years later, I found the bookmark in some papers she kept in a locked box until her death. Although I had not thought about it in years, I instantly knew what if was, impaired vision and all. Avid readers that mom and I have always been, there were a lot of bookmarks in our lives. But for some reason, she kept this one safe and secure for almost three decades.

I began to use it and one day after giving my husband a library book to return I realized I had left the bookmark in it. He still had the book when I called him so I asked him to get the bookmark before he returned it. That evening he looked in his briefcase and couldn’t find it. He swore he put it in his bag but it wasn’t there. He searched the car, called the library and a few other places he had been that day. He felt terrible. I told him it was fine but inside I was really bummed.

After a week or so had passed, it became a joke between us. He would tell me I should stop Type-A’ing and sit down and read. I would reply, “I can’t. I don’t have a bookmark.” A few months later he took everything out of his briefcase for a good clean out. And found the bookmark. 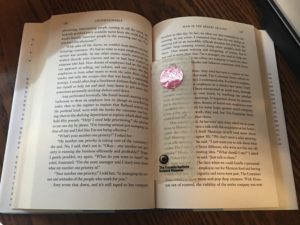 It now resides between page 126 and 127 in the latest book by one of our favorite authors. Every time I get a new novel from one of the writers mom read too, I feel a little twinge for all the books she has missed since she died. We enjoyed many of the same storytellers and now we share the same keepsake.When I tuck it in a book, I like to think she’s reading it with me. This old, thin piece of plastic holds more than my page. Not bad for $.25.

“Life can slow us down when it thinks
we’re moving too fast,
forcing us
to see things differently.
Notice I said slow
not stop.”

We all have had to put the past behind us in order to move on with a new normal. Seven years since my vision loss, I have realized that even when we stop looking back and focus on the future, what came before is still with us. The distance between then and now will increase with the passage of time but it’s always there.

Yesterday morning I was telling someone about testing I’m having done at Wills Eye Hospital, how I am hopeful that someday my sight will be restored, that I will pursue all avenues to that end, but I live my life as if my sight will always be as it is now. A few hours later, I tried something I hadn’t done since I woke up blind, something I used to be a whiz at. And it was damn near impossible given my inability to see very well. As in all things, I was a determined trooper, knowing going in it wouldn’t be easy but grateful there was a potential option for me to return to this activity. The result was soul-crushing. I’ve lived without it for seven years but to have it within reach then have it slip away was painful. I cried.

You can put the past behind you and I have learned, for the most part, to do just that  But it will still be with me for the rest of my life.

“The clock is either
for you
or
against you.”
— an announcer during a football game

It’s Monday.
Try to catch everything that’s thrown at you.
Run like hell.
When necessary, take a timeout. 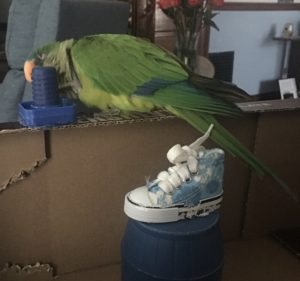 “You can hide from the world,
but the people who love you
will always find you.”