During the two-hour drive home from the bird rescue with our new boy, Piper, already his unique personality began to emerge. If you don’t know birds, let me set the record straight about bird brains. Birds are so smart and all have their own diverse personalities. As soon as we placed Piper in his travel carrier and put that securely in the front passenger seat, he found his jam. The car hadn’t even been started yet, nor the radio, but Piper grabbed hold of some bars and began “dancing” by rocking side-to-side, at a speed we found impossible to imitate. Believe me, we tried

My husband drove and I sat in the back so that I could watch Piper. He seemed to love being in the car and I kept wondering what he was thinking and how many times in his six years of life he had been loaded up and driven to a new home. I thought to myself, “That stops now”.

Piper danced and looked out the window the entire way home. We talked to him throughout, getting him used to our voices, and trying to offer comfort, although all signs pointed to an anxiety-free Piper. Normally when you bring a new bird home, experts recommend that you put the bird in its mansion (aka cage) but when I mentioned this to the woman at the rescue, she said with Piper’s disposition that wouldn’t be necessary.

We pulled into our garage. This was it. For the first time in five years, we had a little feathered guy who we had begun to think of as our child a mere six days ago, when I had called the rescue to say we would love to adopt Piper and the rescue instantly gave their blessing.

We took Piper into the house and opened the travel carrier. He climbed up my arm to my shoulder. He was looking around but seemed completely unworried. We got him fresh water and I stood next to his mansion and he climbed onto it. Less than 24 hours before, the mansion was in a flat box, in pieces, in the back of my car, along with all the food and toys we had bought. And now, the new little man in our lives was in residence, checking things out.

My husband and I sat watching him and would tear our eyes away from him every so often to look at each other. We talked soothingly to Piper as he began to eat. Both of us were thinking about the five years since our cockatiel, Cato, had passed away after 15 years with us. We were also thinking about the 25 days between seeing Piper online to bringing him home.

Once again, we were three. 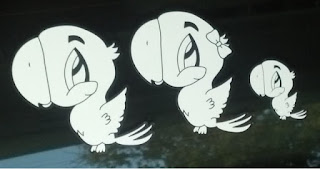