In the 20 years that we have been close friends we had never gone on a trip together, but a weekend getaway remedied that. It was a chance for us to talk uninterrupted by the needs of husbands, children, feathered and furry kids, work and household management responsibilities. The two decades that have passed since we met have seen the highs and lows of life: births, deaths and all that comes between. With two days alone, we were able to tell stories about the girls we once were before we became the women who were first introduced in 1998. 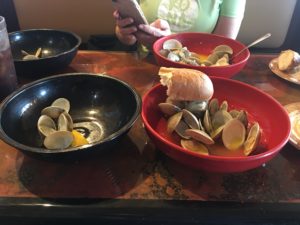 At dinner one of the nights we had steamed clams in their shells, served in a bowl of melted butter. I have had steamers before, but usually the butter comes separately for dipping the clams in. My friend was familiar with the bowl-o-clams and we had a good laugh at my confusion over the menu’s description of the dish.

Open yourself up to new forms of old favorites. I had no idea what I’d been missing all these years. And even though they were so delicious we went back the following day, I’m not referring to the clams.