When my mom passed away, I kept anything I thought I may want, with the thought that I would go through the items when emotions weren’t running so high. I would lose my sight a few months later and the bin stayed closed until a few months ago.

Mostly paperwork, there was a hardcover book, a calendar from 1993, I had assumed was my mom’s when I saved it in 2012. I put it under my Merlin electronic magnifier, only to see not my mom’s writing, but her mom’s, my nana. 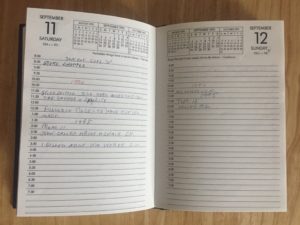 Nana had made entries into the calendar for three years, adding 1994 and 1995 to each day. Most of her notations were about the weather, when the landlord mowed the lawn, and when people came to visit or called her. It is a documentation of three of the last four years of her life, she died in 1996 at the age of 95.

What surprised me the most was that three years before she died, she had made notes off and on that read “Not Good”. She lived alone in Philadelphia until a few months before she passed, and I had no idea she wasn’t feeling well for so long. I don’t think my mom did either. I was newly married back then and although I spoke to and went to visit her often, I wonder all these years later if I should have known nana was having a hard time.

The other unexpected revelation is that she captured the minutia of life. I have tracked events in a calendar for over 30 years and written this blog for eight. I had no idea Nana did this and it seems that I may have inherited this practice from her.

While initially I began going through the book, I decided to keep it by the Merlin and read her entries for the current date each day. Global warming experts could enter her records into evidence based on the temperatures she noted this time of year in 1994.

I read an average of 100 books each year. But this page turner is #1 on the Sister Rain Bestsellers List. It’s got drama, it’s got suspense. And just like its author, it’s got my heart.