Piper is molting. It’s the time of year when he loses old feathers and new ones come in. When he sheds a feather, it doesn’t hurt him. It’s similar to when our hair falls out. 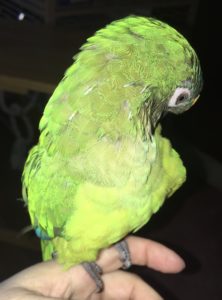 The incoming features are a different story. They don’t cause him pain but it can be a bit uncomfortable. A growing feather is called a “pin feather” and looks somewhat like a shaft, think signing the Declaration of Independence ink-end. Unlike a fully developed plume, the pin feather has blood inside it to nourish it so it will grow. As the pin feather becomes longer, the blood supply is only in the base of the feather, closest to Piper’s body. The tip, the part furthest away from him, is encased in a waxy coating. As Piper preens himself, he removes this covering and the feather unfurls. Why the science lesson? I’m getting there. Patience, my friends. Feathers aren’t grown in a day. Piper spends a lot of time each day working on his feathers but his beak is unable to reach the back of his neck, his face nor his head. So it’s helpful if another bird, or bird mommy, can gently crumble the waxy coating and release the new feather in all of its glory. I love doing it for him because it helps him through his molt and feels good; I know the sweet relief I experience when my husband scratches an itch I can’t reach. There’s a slight problem though. Piper does not like to be touched by a hand. I don’t know if something happened to him with a hand before he came to us at the age of 6 but trying to rub his head will earn me beak contact. He will contentedly sit on my finger, on my shoulder, up against my neck or under my chin for a cuddle. I can kiss him all over but he most certainly bites the hand that feeds him if it tries to stroke him. Our previous bird loved to have his head rubbed and would headbutt my fingers for such attention. He loved having me preen his newly grown feathers and it used to make me wistful that Piper will not allow me to do that for him. I have, though, come to love and admire the spunky, independent qualities of Piper. But each spring season those white spikes poking out of his beautiful green, blue and orange feathers bring out the Mama Bird in me. I want to help him when he can’t help himself. He does throw me a seed every once in awhile. If he is preening himself while perched on my finger, and has his head down rubbing his neck with one foot, he will permit me to slowly reach out and unfurl his pin feathers and scratch his head and neck. His eyes are open so he sees what I’m doing and he no doubt feels my fingers, but we both pretend it’s not happening. I get such a thrill when this occurs, there is a delicious ache in my heart as it expands with love. It’s not easy to let people help you when you are independent, stubborn and proud. It’s scary to be vulnerable and let your guard down. Asking for help from even those closest to you can go against every fiber of your being. But the feeling I have as the pin feathers Piper can’t get to are freed from their coating by my thumb and pointer finger reminds me that people who love you want to help you on a visceral level. Let them. Because there’s nothing worse than an itch that needs scratching or a feather that needs unfurling.