In my work life, I would use rental cars, cabs, shuttles, planes and car services with not one thought about it except in regard to dates and times. Since my vision loss, I have relied solely on rides from magnanimous family and friends. There is no public transportation where I live, but there is Uber. I knew that this service existed but for some reason gave it no consideration. My current life is filled with constant irony and this is one of those instances. When I had my full sight, I would have not hesitated to use Uber. But now when I need it, the whole idea of it gave me great pause. It wasn’t fear but something indeterminable and so I ignored the option for a long time.

And then, knowing I have quite a few appointments coming up, planning and logistics forced me to look at the best course of action. You can take the  meeting planner out of corporate America . . . The people in my life are SO generous with their time and vehicles and they will always be my first selfish choice. But Uber became a solution I could no longer deny.

So today I took my first Uber ride. What once would have been second nature, a means to an end, a blip on the radar of my day’s activities, is now one of the biggest events of my life. I left my home without the security of someone I love accompanying me and although it will return some of the independence I lost, it still felt really odd. Getting in a friend’s car is fun and more about the journey. Hiring someone to drive me is all about the destination.

I told you, friends, like Uber, irony is everywhere.

My vision may have been taken from me
For that I didn’t have a say
But some things we have control over
We can do more than just hope and pray.

So let me declare to LA and the world
Don’t take my Oscar or Miss Universe crown
You’ll be prying them from my cold, dead hands
But at least I’ll be wearing a gown.

On Friday I began watching This Is Us. The hype and recommendations of friends led me astray but in the best possible way. I was hooked as soon as I saw Jack in his birthday suit. I crammed as many episodes as I could that first day, each bite more delicious than the last.

Saturday came and with it what I refer to as “the usual nonsense”: grocery shopping, cleaning, laundry. Saturdays tend to be my day free from the exercise bike, although there is plenty of step climbing and lifting of weights in the form of cases of water and bags full of groceries. And yet, yesterday, a Saturday, I made time to pedal for an hour, so that I could watch another episode. I would have kept pedaling, and watching, if duty didn’t call.

And I loved every minute of it.

This is definitely not me but This Is Us.

With Presidents’ Day being celebrated this week, I heard a comedian talking about Daniel Day-Lewis not breaking character for three months during filming of the 2012 historical drama, Lincoln. Five years later, the actor’s approach is still poked fun at. As I heard the joke, I thought about and admired him for being so committed to something that you completely immerse yourself in it. As I continue to reinvent myself after the loss of my vision, I have explored different tools, including meditation and visualization and I believe in slowing yourself down and seeing yourself achieving your goals.and once I figure out what mine are, I will immerse and visualize and achieve.

I have never thought so much about my purpose or my future until my eyesight was compromised and a new life began for me. Whereas in my past I entered corporate America after school and organically found my career path, knowing only that I wanted to move up the proverbial ladder, now I only know that I have a story to share and the desire to make people laugh, think, and know they are going to be okay, no matter what. Because within three years, four devastating “what’s” occurred in my life.  And I know it’s incredibly difficult but you will get through it.

I envy Mr. Day-Lewis. In portraying Lincoln, he had history and a script to work from. Me, I am still creating the new Sister Rain. But each day I see her more clearly, and I am focused and I am motivated. Just as long as I don’t have to give up my cell phone or wear a corset, that is.

“One little spark of hope can ignite an inferno of possibilty.”

The answers for all our problems are found on early morning TV:

And then there is the Ghost of Normal Present. It, too, is an apparition but the most real of them all. It is honest, at times brutal, but deep inside, beyond the pain and the fear, we know the Ghost of Normal Present is friend, not foe. But believing this means letting go. And how do you blindly, in my case figuratively and literally, relinquish what we know and love? Of what we are convinced makes us us?

And yet we must.

Progress forward will be slow, with lots of backsliding and days we cannot move at all. But in the end, we will survive and we will adapt. Our Ghost of Normal Past, over time, won’t hurt so much. It will come in peace.

I have learned three things:

Day #2 of sun. After the gloomy, grey days we have had, I’d call this a streak. 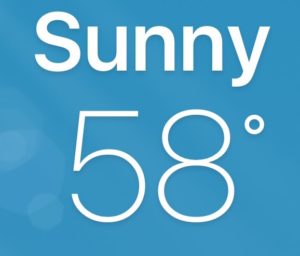 I made lasagna for dinner last night. When I went to put foil over the pan before I placed it in the oven, there was not enough to cover it. My husband was on his way to the gym from work, and he had to go by our neighborhood, so I asked him to stop for foil and I would meet him out front to get it.

He texted me as he left a small market close to our house and I went out front for the baton pass. I asked him to open the foil for me as this can be a dangerous challenge with my limited vision and the cutting blade. He drove off to work out and I went to the kitchen to finally get dinner baking. This foil was a generic, cheap brand and starting the roll was all but impossible. Once I did manage to lift it off the tube, it was so thin that it tore and I just couldn’t get an even edge going. Pieces of foil, in various sizes, were on the counter, on the floor, everywhere but on top of the lasagna. I almost called my husband to come back but instead did what one does when one is faced with a ruthless, evil opponent threatening your painstakingly prepared pasta dish. You declare war.

I grabbed a weapon out of the knife block and I attempted to slice down the length of the roll to get a fresh edge. In the midst of my attack, there may or may not have been a battle cry, I was aware of the consequences of being careless in this fight. Knives are no joke for anyone but for someone with little vision, future hand-to-hand combat could be jeopardized as could wearing rings. All my precise cut did was cause more tearing. Was I working with foil or tissue paper?

Safety has become such a prevalent part of my life since I lost my sight that somewhere in my subconscious I knew to put the knife down. I continued my assault, this time with fingernails clawing to separate the foil from itself. I was tired and had the thought that the lasagna was going in the refrigerator for another night, even though I’d have to cover it with wrapping paper. You may wonder if I don’t have plastic wrap. If you think foil and I don’t get along, I will tell you that plastic wrap is dead to me.

Perhaps my nana or Betty Crocker or Julia Childs were looking down and took pity on me because finally I caught a corner and unrolled a complete piece. Once it got going, I held my breath until I had a sheet long enough to cover the pan. Using a pair of scissors I cut both ends, fit it over the lasagna and put it in the oven. It didn’t take long for the house to smell wonderful and we ate a little after my husband got home. To his credit, he never said a word about the bits and remnants of foil all over the kitchen. He sweetly cleaned it all up while I was out of the room but then did innocently comment that, “Boy, that foil is thin!” when I came back into the kitchen. I couldn’t see his face but let me assure you he saw mine.

Lasagna is a lot of work to make. But chopping onions, smashing garlic, making meat sauce, grating cheese, arranging slippery noodles and the rest into layers is a piece of cake compared to wrestling with a roll of flimsy aluminum. Unless, that is, the piece of cake needs to be wrapped in foil.